How the presence of phosphates affect algae growth

Algae growth is a common problem and some experts have suggested an effective solution is to remove phosphates from the water. The belief is that this action takes away a food source, reducing algae problems or even killing it (by starvation). It is important to note that phosphate-removing products are NOT registered as algae killers (algaecides) or algae inhibitors (algaestats).

Phosphorous is the base element phosphates derive from and is a significant nutrient source for all living things, including algae (it also requires carbon, oxygen, hydrogen and nitrogen). There are more than 7,000 species of green algae alone and the phosphorous requirement varies widely between each of them.

Algae even have the capability to store phosphorous within their cells and can still thrive in phosphorous-deficient environments.

This is called “luxury phosphorus uptake” and demonstrates that removing phosphates from the water will not remove the algae’s ability to continue feeding itself. Algae feed on phosphorous from sources other than orthophosphates (the only form removed with current products) and those products have little to no residual, making it difficult to provide a lasting effect due to the constant influx of phosphates from various sources.

There are four chemical treatments that will inhibit or kill algae; chlorine (hypochlorous acid), quaternary ammonium compounds, polyquats and copper. Chlorine will disrupt the metabolic activity within algae cells and growth will not continue, even in nutrient-rich surroundings. Often, algaecides are only used as a corrective treatment, but an initial dose added at the start of each season, or whenever significant amounts of water are added, will prevent algae growth during the course of a season. The addition of an algaecide can also contribute to improved water quality.

A properly maintained pool utilizing the BioGuard systemized approach by having the water tested and balanced, and using BioGuard’s 3 step System which includes BioGuard Silk Smart Stick (to maintain chlorine between 1-3 ppm), BioGuard Smart Shock (to oxidize swimmer wastes), and BioGuard Banish (multi-functional maintenance Algaecide). This will keep the pool clean, clear and algae free and reduce the need for additional products.3RF

Where do phosphates come from?

Phosphates are derived from phosphorous, the 11th most abundant mineral in the earth’s crust. It makes its way into pool and spa water from a variety of sources, including fertilizers, industrial discharge, swimmer waste (sweat and urine), detergents and even tap water (which contains compounds used to treat corrosion). 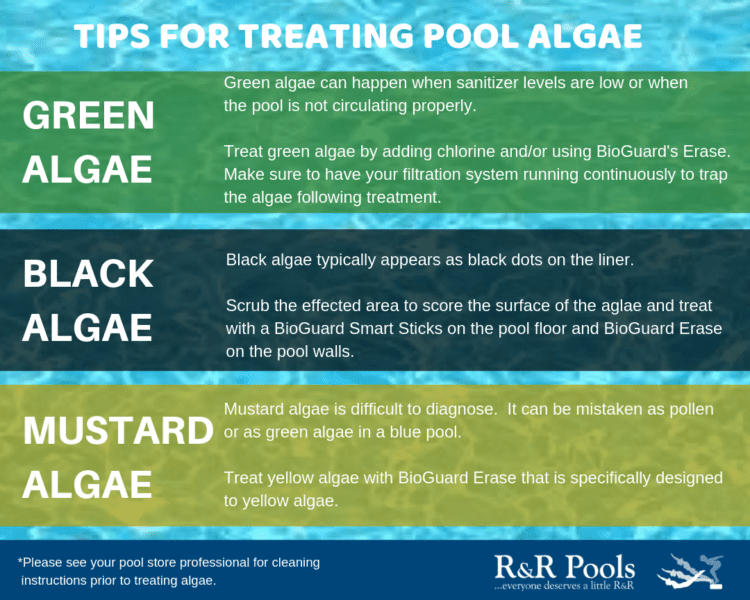 Sign up to get updates on new products, promotions and special offers.